Quite Simply Food is Life 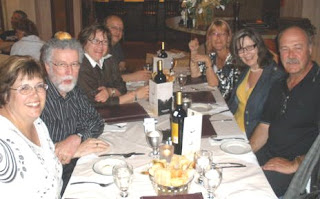 This past May I was a guest at the Slow Food Banchetto hosted by University of Toronto’s Hart House where the founder of Slow Food, Carlo Petrini, spoke. In his address to the gathering he said something that has resonated with me ever since, that the very first instinct of a newborn is to suckle. We emerge with food on our minds.

Food has always been a big part of my life although I did not pursue learning to cook until I was well into my 30s. My mother is a great cook but never pushed me to learn. I didn’t realize until much later that I had learned a lot from her simply through observation. All she asked of me was to help in the simple tasks of preparation and because she was always cooking I was in the kitchen a lot. Even more importantly the result was that the entire family sat down to table every morning and evening.

Mom had a good repertoire of simple, nutritious recipes that would later expand to encompass more sophisticated fare for entertaining and special occasions. I loved my mother’s cooking. Growing up my brothers and I would have cream of wheat for breakfast in the winter and fresh fruit with cream in the summer. Sunday breakfast was always bacon and eggs. On rare occasions we’d find Dad at the stove Sunday morning sautéing mushrooms to accompany his favourite breakfast.

Weeknight dinners could be spaghetti with meatballs, macaroni and cheese or pork chops cooked to perfection with scalloped potatoes, perhaps Nana Keegan’s beef stew. We always had deserts because Dad had a sweet tooth. There could be rich, moist hot milk cake, brownies, banana bread or layer cakes (chocolate with chocolate icing of course). After school we were often greeted with the delicious aroma of homemade applesauce that my Mom also used to make her awesome applesauce cake. I can almost taste it when I think about it now!

We all looked forward to Sunday dinner because that meant roast beef and Yorkshire pudding. Occasionally my mother would make pork roast with the chine bone roasting along side as a treat for us kids. She would be in the kitchen all day baking not only apple pie but apple turnovers and sometimes apple dumplings. Often there would be the addition of a lemon meringue pie and because that was my brother Randy’s favourite my mother would fill a little china bowl with lemon curd just for him.

Then there was Christmas. Tradition reigned with Quebecois Tortiere at midnight on Christmas Eve. Roast turkey with homemade cranberry sauce and roasted potatoes on Christmas Day. Sweet things like tender shortbread and my father’s favourite sweet mince tarts would be made in advance and hidden until the big event. These hidden gems would find their way onto the desert tray together with flaky crusted little apple and lemon tarts. The pièce de résistance would be Nana’s plum pudding served with Mom’s sweet vanilla white sauce.

The inviting aroma of my mother’s cooking always filled the house, our bellies and our hearts with its goodness and her love. I thought everyone ate like we did. Of course this was not the case and would discover when invited to eat at some friend or others house, that all too often out-of-the-box prepared food was the norm. One memorable occasion left me dumbfounded to find out that mashed potatoes could come from a pile of what appeared to me to be dried bits of paper. I have yet to understand why it’s easier to buy prepared food. What can be easier than boiling potatoes and mashing them with fresh butter and milk?

Apple pie cooling on the counter and roast beef in the oven will always conjure for me fond memories of family. Sunday dinners full of raucous laughter and conversation. Just the wisp of a thought or the armoa of a particular food or dish can take me to the exact moment of experience, remembered conversations and emotions and the faces of those that I shared it with. Escargots and Chateaubriand forever place me on New Year’s Day with my family at Montreal’s Helene de Champlain restaurant. Food is a formidable key to memory.

As I got older food became associated with dinner parties, friends and wine. When not enjoying the culinary skills of the more talented among us we would dine out in some of Montreal’s wonderful restaurants. Soupe a l’oignon at Les Petits Halles or Les Halles for the ultimate traditional French dining, Le Paris for steak aux poivres, local Quebec cuisine at Chez la Mere Michel, oysters, salmon and Chablis in Vieux Montreal. I’ll never forget breakfast blintzes at Beauty’s or Dunn’s famous mile high strawberry cheesecake - usually consumed after clubbing until 3:00 in the morning.

Saturday afternoons were reserved for strolling St. Laurent with friends. Stopping to devour still hot from the oven bagels at Montreal's famous St. Viateur Bagels. Later we would move on to Schwartzes for smoked meat or Welensky’s for their famous deli treats. Our meandering day leading us eventually to a sidewalk café. Settling in to enjoy an espresso or an icy cold pitcher of sangria. All the while laughing, talking, flirting and indulging in Montreal’s favourite pastime of people watching.

I did finally learn to cook when I relocated to Toronto in the early 80s. Money was scarce and I was forced to dust off the cookbooks my mother had given me if I wanted to eat well. My first attempt at “gourmet” cooking was a recipe for chicken that listed wine, shallots, cream, and tarragon among others. What a shock! It was a success and that was it. I was hooked on cooking.

Cooking became a hobby that would evolve into a passion. The process of preparing food became my preferred method of relaxing after work and accompanied by the satisfaction of eating what I'd made. The pleasure of food shopping became an addiction. My love of Saturday morning spent roaming Kensington and St. Lawrence Markets remains one of my favourite pastimes. This pleasure now includes the multitude of farmers markets that have popped up all around Toronto. It simply makes me happy. I could go on forever about the cheerful hustle and bustle of activity, the colourful displays of vegetables, spices, seafood and baked goods. The comfort of familiar favourites and the thrill of new delights found and yet to be found bring me back week after week.

At 42 I decided to become a chef and enrolled at Toronto’s George Brown College Chef School. This decision would take me into a completely different life. Italian cuisine is the gold standard for me and in my second year I was accepted into the Italian Culinary Program. The most exciting aspect for me was that we would travel to Italy to work a restaurant stage and study in Piemonte at the (ICIF) Italian Culinary Institute for Foreigners. I became one of the oldest apprentices in a country where by the age of 15 you must decide what career to follow!

Although I have a taste for many diverse cuisines Italian cooking remains my standard. It is a cuisine of elegant simplicity, true clean flavours and attention to detail in preparation and presentation. Italy taught me the importance of terroir in the production of food. How the very air and its currents have a profound effect on taste and texture. Italian cuisine illustrates and celebrates the importance of tradition in combination with a respect for the land and in supporting regional producers. The reverence that Italians have for food is evidenced by a plethora of sagre the ubiquitous food, wine and culture festivals found nation wide. It is a place that more often than not defines itself by the food it produces and the resulting cuisine. The importance of tradition runs deep.

Eating was always important to me but cooking became a passion. Like most chefs I cook for people because of the pleasure it enables me to give and the reciprocity of that pleasure. Food is history, follow its path and you follow human kind’s trajectory through time. Food is culture. Food is respect for the people who labour to produce it. Food is sustainable husbandry. Food is love, family, friends, joy and pain. Food is life.

Deborah Keegan
I love food, I love to cook, I love to eat, and I really love to explore all kinds of markets. Most of the best memories I have are of family and friends around a table, eating, drinking, talking, laughing and maybe even arguing. Sort of a microcosm of life.